Woohoo! I always love the beginning of new projects, when I get to learn all kinds of new stuff! Lately, I've been researching some amazing women in science and math, including Ada Lovelace. Ever heard of her? Here are just a few things you should know about her: 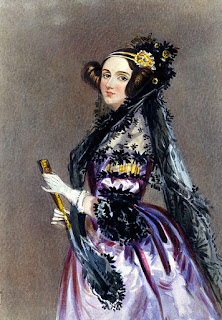 How about you? Tell me what you've learned today, and I'll enter you in a drawing to win a signed copy of one of my books!
Posted by Valerie Bodden at 10:52 PM No comments: